Richard III- “My Kingdom for a herse”

This week has seen history in the making- the burial of a King; the funeral service of which was conducted earlier today in Leicester Cathedral.

Coincidentally, this week I came across an old photograph of a 23 year old (blonde!) me at Middleham Castle next to the statue of Richard III, showing me patting him on the back. I was giving him a little sympathy as, in my opinion, he’d had a rough old time of it. And this was years before we thought his grave had been covered by a council car park…

The journey to get to today’s events has been fraught with controversy and criticism- points which will in all probability be debated and discussed for many years to come. But why exactly have some people been up in arms about this week’s events?

King Richard III – the portrait shows later alterations to raise the height of the right shoulder and narrow the eyes.

When I was studying towards my undergraduate degree, I had to research and write an essay on the Wars of the Roses and I chose to write about Richard III. I found the whole subject fascinating, not least because of the impact that ‘pop culture’ – ‘Tudor propaganda’?- such as portraits and plays, has had on how we perceive him.

I remember researching portraits of Richard III. No portraits of him painted in his lifetime survive, only those following his death. Take a look at some of them- he is looking away from the painter, avoiding eye contact, with narrow eyes and thin lips, as if he is not to be trusted. He is also playing with his ring, distracted or paranoid, perhaps.

But how much of this is ‘artistic license’, done to please the then current royal household? A picture paints a thousand words- but they do say that history is written by the victorious… Art historians have also discovered using x-ray technology that a portrait of Richard III was modified soon after completion to exaggerate the curve of the King’s back. Caught in the act (well, 500 years later…)! 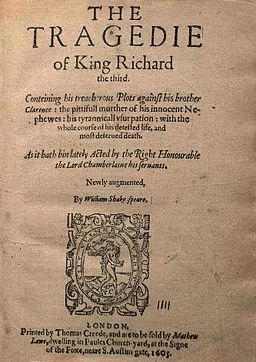 Around a century after Richard III’s death and firmly into the Tudor dynasty, Shakespeare also ‘painted’ the King, but this time with words. In his play entitled ‘Richard III’, adjectives such as ‘rudely stamp’d’, ‘deformed’, ‘unfinish’d’ were bandied around and comments such as him being barked at by dogs if he stood near them and depictions as an evil calculating murderer were written down to be repeated again and again over the following five centuries.

It is said that Richard III was so desperate to be King that he murdered the Princes in the Tower- his two young nephews who were heirs to the throne, but the facts are that there is no proof for this whatsoever. But why let the facts get in the way of a good story?

If Richard III did kill off his rivals in order to get to the throne- what’s new? How many stories can we tell about other monarchs ‘getting rid’ of people who got in their way? Is the reason Richard III has a bad rep because he didn’t do it publicly?

However- let’s look at ‘reasonable doubt’- who else could have done it? We must remember that just over two years later poor old Richard has met his end on the battlefield and has lost the throne to another House. Does this not present us with another prime candidate for killing off the competition?

It’s in the genes

There were some qualms about how sure archaeologists could be that they had found the bones of a King or whether it was all purely coincidental. They had found a skeleton with war wounds, which had evidence of a curved spine, was male, the correct age and from the right period… What did that prove?

Research told us that the car park the skeleton was found beneath was being excavated because it was the site of a former monastery- the place said to be his final resting place.

Following that, the bones were scientifically dated to the correct period to place him at the Battle of Bosworth- where Richard III died in battle not even three years after he was crowned King of England. But there was still cause for doubt.

That was until DNA tests were carried out on the bones and the living ancestors of the monarch, tracing the genes back over 20 generations and making Richard III the oldest ever individual identified through DNA testing.

Like so many monarchs and royals before and after him, Richard III was not buried in Westminster Abbey, nor was the Yorkist reinterred at York Minster in his homeland. But what I hope people can now agree on is that this week’s events in and around Leicester and its beautiful Cathedral have been fit for a King.

What we must remember is that we have witnessed the burial of a man, a man who died in battle. These are human remains which, regardless of lineage, deserve respect.

The individual whose death shaped our future- bringing an end to civil war and marked the beginning of the Tudor Period, when Henry VII came to rule the country; a period most of us will have studied in primary school.

What we have just witnessed is history- the burial of a King.

The Tomb of King Richard III at Leicester Cathedral