When I tell people that I am married to a golf pro, they think that our jobs can’t be much farther removed from each other. But actually, you’d be surprised at how they can cross over.

For example, there are quite a few golf courses on hillforts- trust me to know that! But so much more than that…

Take Llanymynech Hill on the border of Wales and England, Powys & Shropshire. A massive hillfort, one of the largest in Britain, with evidence for ancient mineral extraction too. If the golf club want to move a hole, they need Schedule Monument Consent!

And one of the prettiest golf courses in Wales, in Nefyn on the Llyn Peninsular has the remains of a rampart over the neck of the promontory, just up the hill above the famous Ty Coch Inn on the beach.

Our local golf club in Abergele runs alongside the truly spectacular ruins of Gwrych Castle, an 18th Century folly built in the style of the ancient castles of Wales. The Friends of Gwrych have recently opened one of the towers and are restoring it to depict how it would have looked in its glory days- still within living memory.

But the reason this link springs to mind is because yesterday I had the pleasure of spending a couple of hours with the truly wonderful Eflyn Owen Jones, the daughter of the gentleman behind the discovery and identification of the Llyn Cerrig Bach Hoard, found on Anglesey during World War II.

I have been telling the wonderful tale of the discovery of the Llyn Cerrig Bach hoard for many years and was delighted to first meet Eflyn a few years ago. I have recently had the pleasure on working on a project to tell the story of this amazing discovery through our new Prehistoric Anglesey comics at work. But until yesterday, I didn’t realise how much golf played a part in the discovery of the 2000 year old artefacts discovered at Llyn Cerrig Bach. 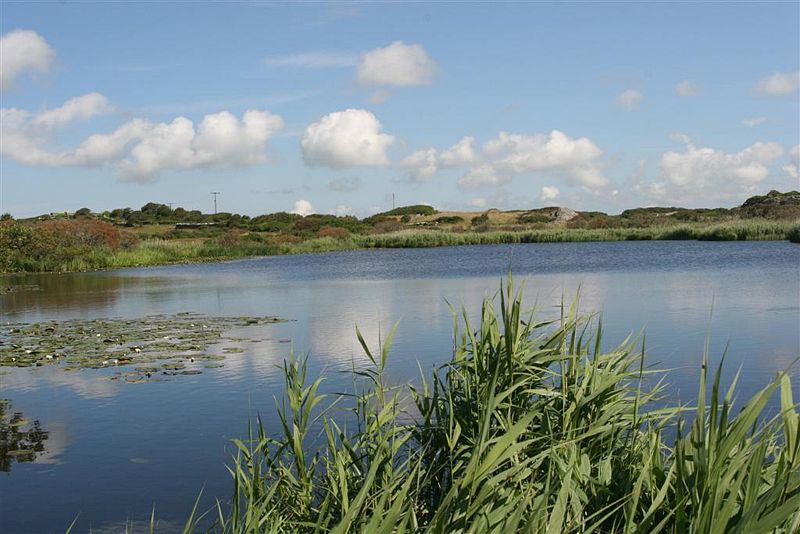 During World War II, RAF Valley on Anglesey needed to extend its runway for the new large American bomber planes to be able to use the base, but the sandy ground, sand dunes and marram grass was making this an impossible feat. So much so, that Eflyn tells me that there is a letter from Churchill stating:

RAF Valley has two enemies- the Germans… and SAND.

But just next door to the air base lies Anglesey Golf Club, with lush greens and perfect grass. And Eflyn’s father was the greenkeeper.

William Owen Roberts was asked to help and became the Head Groundsman at RAF Valley. He knew that to be able to make the ground useable, they would need to dredge peat from the surrounding area.

One day, a works lorry got stuck in the peat and to free it a large iron chain found lying in the ground nearby was used to pull it free, attached to a tractor. It was very strong and held fast, so they kept hold of the item. But Mr Owen Roberts was intrigued as to what the chain was- he had his suspicions then that it was something very special, so asked the RAF Engineer Mr Jones whether he could identify it. He couldn’t either, but was able to sketch a very fine drawing of the artefact, which they posted to the Director of the National Museum of Wales in Cardiff, Sir Cyril Fox. He was able to identify it as an ancient  slave chain, dating back to the Iron Age, over 2000 years ago and over the next four years, with Mr Owen Roberts’ help, a massive ritual hoard of ancient objects, previously deposited in the former lake, were recovered, including a trumpet, swords, spearheads, parts of cauldron, and parts of wagon, cart or chariot.

Over 150 objects have since been discovered and you can see many of them on the National Museum of Wales website, if you’re unable to visit them in person in Cardiff.

Just over three years ago, the Oriel Ynys Mon gallery and museum in Llangefni on Anglesey were able to exhibit the items, where they were originally found which was an absolute delight and a very special occasion, especially as I visited with my lovely friend Heather who came over to Wales all the way from America for a year to study Celtic Art at Bangor University.

And all because of a golf course and the truly extraordinary detective work of its greenkeeper William Owen Roberts. You’ll never look at that green, green grass in the same way again!

You can also read more about golf course archaeology at the following ‘links’:

Forgotten fairways: Golf courses lost in the rough of war

And Eflyn’s very own blog can be found here: llyncerrigbach.blogspot.co.uk