Many of you will have seen the national headlines as two recent storms were the (literal) breaking point for sections of Colwyn Bay’s Victoria Pier. 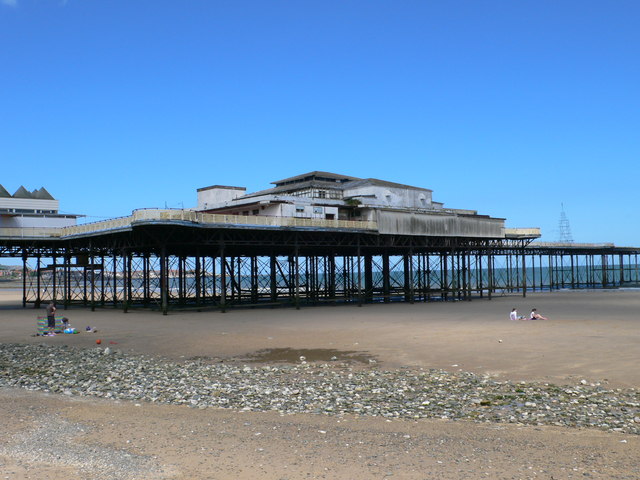 Colwyn Bay pier, first opened in 1900, has a long and varied history- but the recent storms are just the latest in its turbulent past. The building we see today is actually the third pavilion which has stood in the spot since 1899!

But as well as disastrous fire and fierce storms, it has also been host to Hurricanes- the band that is!- along with other really famous faces including The Damned, Herman’s Hermits,  Showaddywaddy, Motorhead, Whitesnake, KC and the Sunshine Band, The Jam, Elvis Costello, Iron Maiden, Thin Lizzy, the list goes on and on! And you can find out all about its 100+ year history with me this weekend on BBC Radio Wales.

Last summer, I was delighted to join the BBC ‘Rockin the Gogs’ team as their ‘resident historian’. In tomorrow’s (Saturday) episode, 1.30pm and repeated on Sunday at 6pm, I join Gareth Jones and the Rockin’ the Gogs team to travel back over 100 years into Colwyn Bay Pier’s fascinating story.

Rockin the Gogs this week delves into the history of the Dixieland Showbar, which was an iconic rock music venue on Colwyn Bay Pier. But the pier also marks another iconic period in British history- the British seaside holiday and a sense of escape from the looming Industrial Revolution.

It turns out that bands like The Damned can actually thank religious pilgrims?!

In order to introduce Colwyn Bay Pier’s 117 year history, I take listeners back 2000 years to the Roman period- well, you know I love a bit of archaeology! And that’s where I believe ‘tourism’ has its early beginnings.

Fast forward to the 19th Century and the coming of the railways, with industry (and pollution) increasing and the establishment of the paid holiday, places like the newly established ‘Colwyn Bay’ were hot tourist destinations. And these tourists needed entertaining. The pier was the perfect place!

You can hear the full story about Colwyn Bay pier with its various extensions, buildings, electric(!) lighting, changing fashions and tragic fires tomorrow on BBC Radio Wales, or catch up on BBC iPlayer.

And it is a timely broadcast. In the last few weeks, the pier has seen even more destruction as natural events attempted to take the pier’s fate into its own hands. Large sections fell into the sea below in early February, and even further collapse occurred during ‘Storm Doris’.

But this is followed by much more positive news. It has now been agreed that money will be invested into restoring a section of the pier as a ‘truncated boardwalk’.

So there is life in the old pier yet. With the reinvestment in Colwyn Bay’s waterfront, with the new watersports centre, Bryn Williams’ restaurant, restored promenade and gorgeous golden sandy beaches, I really hope that Colwyn Bay is set to become a popular tourist destination once again.