So much so, that I arrived at my wedding reception venue in one, donning my bright purple wellies underneath my wedding dress…

Boats have been a part of my life for a long time, especially as I seem to always find myself steering towards water. I grew up a stone’s throw from the now World Heritage Site of Pontcysyllte Aqueduct and Canal and my first ever job was cleaning canal boats at Chirk Marina.

I am now lucky enough to live really near the sea and treated myself to sailing lessons when our new watersports centre opened nearby last year. I was also delighted to lead the highly acclaimed Welsh Shipwrecks education project on Anglesey with a number of schools. We delved deep, figuratively speaking, into the story of one of Britain’s most famous shipwrecks- the Royal Charter. That is another story, however, and is one for me to share another day.

“One of the best kept secrets of World War II”

One of my favourite things to do is to watch the sunset from the beach at Conwy over to Anglesey from Conwy Marina and the Mulberry. Now, of those of you who are local, you may laugh at that statement as the Mulberry is now a pub(!). However, it sits at the location of an original ‘Mulberry Harbour’ which played a key role in the D-Day landings and is described as “one of the best kept secrets of World War II”.

Mulberry harbours were a series of portable floating harbours to help offload supplies on to the beaches during the Allied invasion of Normandy.

Welsh engineer Hugh Iorys Hughes from Bangor was given the task to trial designs for the Mulberry Harbours in Conwy. The area became a huge construction site and was taken over by over 1000 workers to make and test the prototypes, to be ultimately launched into the Conwy Estuary and travel south to France.

Now, the welcoming and peaceful harbour nestles next to the renowned Conwy Links Golf Course and the wide golden beach. I wonder how many people know how much has changed there in the last fifty years, and the secrets held in that exact spot as they struggle with a tricky six-footer on the Second Green. 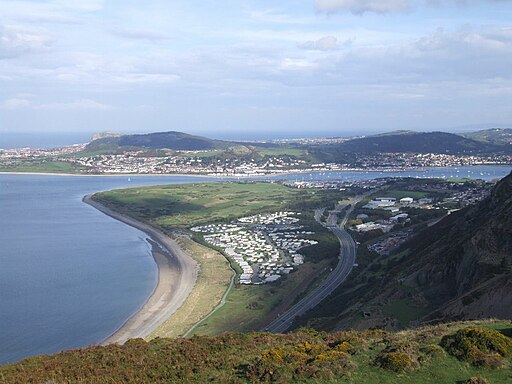 PostHole In One TE Lawrence, the Welsh-born ‘greatest Englishman who ever lived’