From a young age, I was aware of north Wales doubling up as a movie set, after taking a horse riding lesson on the very horse that Richard Gere had once sat upon. “This mare was in First Knight!” the tutor exclaimed, and I have never forgotten that gorgeous white horse since.

For many years, Wales and other stunning locations across the British Isles have shared their beauty with the world- although sometimes the world hasn’t known it. Presenting itself as China, Canada and Kazakhstan, the silver screen has taken full advantage of the beauty, tranquillity and real welsh welcome that is on my very own doorstep to tell its stories.

But what about the real stories of these film locations across the British Isles? Even more classic tales lie behind the scenes…

This stunning area just below Mount Snowdon has legendary links with King Arthur, both on and off screen. The hill fortress of Dinas Emrys is said to be the home of Vortigern, 5th century war lord who features in the tales of King Arthur, and the battle which took place here between two dragons is the reason we have a red dragon on our flag today.

Nant Gwynant is also the home to the Pen y Gwryd Hotel, training headquarters of the first successful Everest climbing expedition in 1953. Dramatic shots (with a sprinkling of comedy, which Sherlock does best) of dramatic landscape are featured in the Sherlock sequel and were shot overlooking Ffynnon Llugwy lake, near Capel Curug.

Obviously close to my heart, fellow archaeologist Lara Croft has also filmed at Llyn Gwynant, although it was transformed into a Chinese village, in which she arrived in style/an epic ‘crash landing’ over the lake! She also jumped off a 100ft quarry face in the Alexandra Slate Quarry, just to the east of Moel Tryfan near Caernarfon.

Just a few miles over the hills lies the welsh village of Beddgelert, famous for the tale of the loyal hound which was killed by a Welsh prince for killing his baby when he was found next to the upturned cradle with blood on his mouth. After the prince had killed Gelert in a fit of rage, he discovered that the hound had actually saved the child from a wild wolf, which he had killed. Here lies the grave (bedd) of Gelert.

The second largest slate quarry in the world, it was also home to the highest locomotive shed in Britain and the largest waterwheel on mainland Britain. It is now home to the National Slate Museum and also Dinorwic: Electric Mountain, an underground power station.

Some of the historic places in north Wales which have been transformed into adrenaline activity hubs are highlighted in my blog post: http://idigarchaeology.co.uk/new-life-for-historic-sites-in-north-wales/

Newborough Woods (Clash of the Titans)

Newborough is so-called and was created after Edward I decided to build his new castle and town, Beaumaris, on the site of thriving welsh trading sea town of Llanfaes. He relocated all of the welsh inhabitants to a new settlement ‘new borough’ on the other side of the island of Anglesey.

Just at the tip of Newborough forest, now a home to red squirrel, is Ynys Llanddwyn, home of Saint Dwynwen, the welsh St Valentine. I have written about her tragic story here: http://idigarchaeology.co.uk/welsh-valentines-day/ 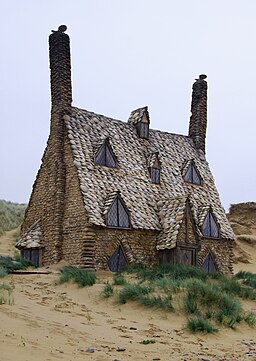 Epic Battles, secret hide outs and the death of our favourite house elf Dobby, Freshwater Beach has seen it all. In real life, this is a historic site for smuggling and the coastline here is full of historic shipwrecks.

There is a thatched shack on the foreshore which was historically used for drying the Welsh speciality of seaweed, Laverbread and also a Neolithic Chambered tomb named ‘The Devil’s Quoit’ which has a huge capstone measuring 3.7 x 2.4m.

Pembroke Castle (Me Before You)

Recent release Me Before You starring Game of Thrones’ very own Mother of Dragons Emilia Clarke,  Sam Claflin from The Hunger Games and Matthew Lewis from Harry Potter fame, the story is set around the ruins and pretty village of Pembroke Castle.

The castle has its own claims to fame off of the silver screen, and was the birthplace of King Henry VII (the Welsh King who began the Tudor Dynasty), and is the only castle in Britain to have been built over a natural cavern- The Wogan. 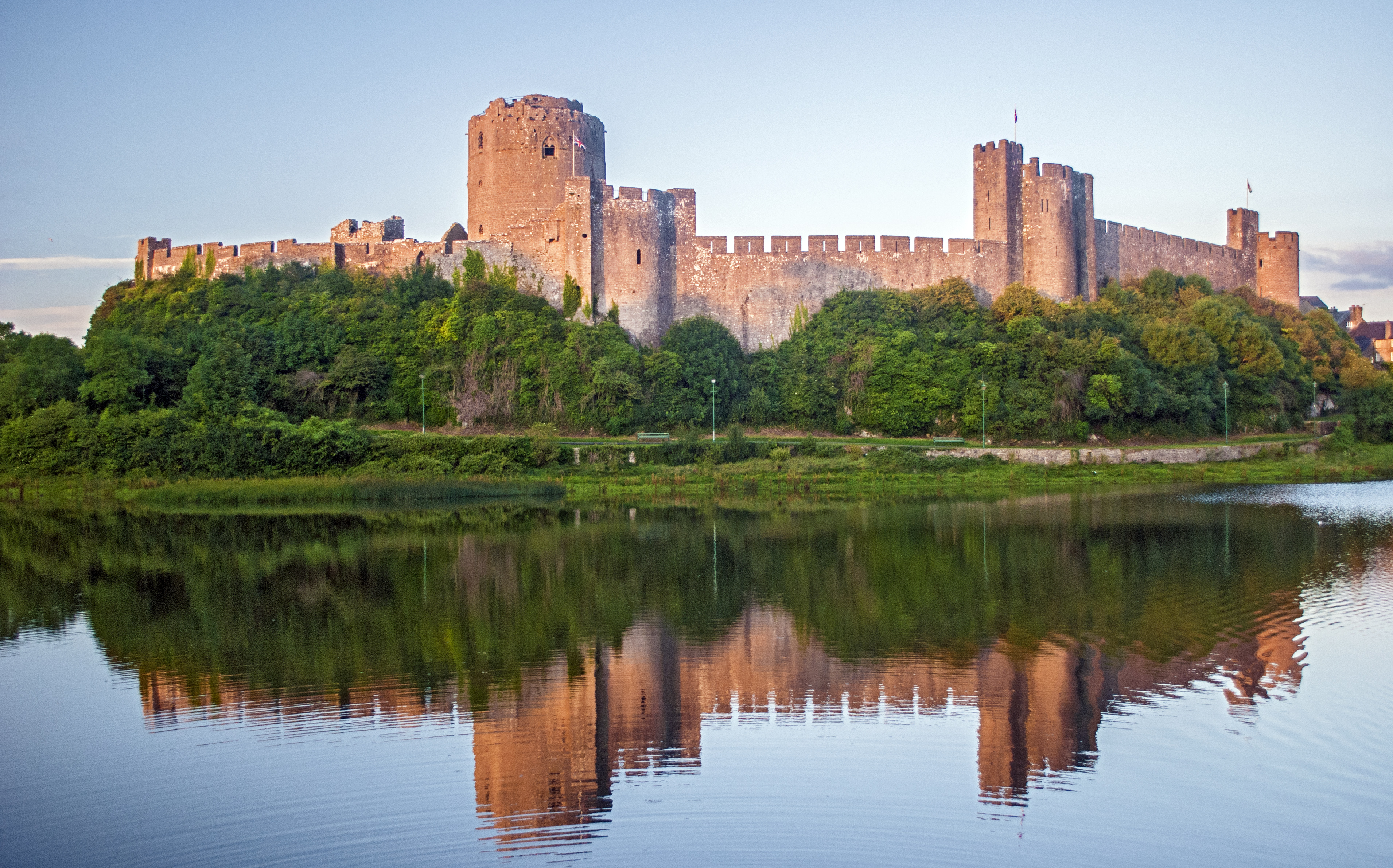 With 4000 years of continuous habitation, it’s no wonder it is the perfect setting for many of the Time Lord’s episodes. With prehistoric monuments, medieval abbey and Tudor style mansion, home for many years to the Talbot family, of Port Talbot. The Margam Deer herd were introduced by the Romans.

During the film, the Star played by Claire Danes is trekked along mountainous landscape and was shot on the hills above Llyn y Fan Fach. This lake is associated with the legend The Lady of the Lake, but a tale very different from the Arthurian legend more commonly known. A man was to marry the Lady of the Lake, who rose from the water, as long as he didn’t hit her more than three times. She brought with her special cattle which are still bred at the Dinefwr estate today. After strange behaviour such as laughing at funerals and crying at weddings, the man did not keep his promise and the lady was sent back to the lake, and took her cattle with her.

The area is also known for its medicinal history, special recipes recorded in welsh manuscripts suggesting that Welsh medicine was one of the most advanced in Europe at that time. Legend has it that it was the children of the Lady of the Lake who became these special doctors, The Physicians of Myddfai.

The setting for the derelict Wayne Mansion, Sutton Scarsdale Hall was originally built in the fifteenth century and was remodelled in the eighteenth century. However, the cost of the building meant the family had to sell and it was sold to a company of asset strippers in 1919. Many of its rooms were sold off and three rooms, as they were, are now on display in the Museum of Art in Philadelphia. The building itself was left as a shell, most of its interiors sold as architectural salvage.

The Priory Church of St Bartholomew (Four Weddings and a Funeral, Robin Hood Prince of Thieves, Shakespeare in Love, Elizabeth: The Golden Age)

A regular setting and behind the scenes of some of our favourite flicks, the building is London’s oldest surviving church, founded in 1123 as an Augustinian Priory and has been in continuous use since 1143.

I could write a LOT about the film locations in Prince of Thieves and as there are so many stunningly beautiful locations, many of which have a fascinating historical story of their own including Sycamore Gap on Hadrian’s Wall, perhaps the legend of Robin Hood and the many secrets and possible historical figures behind the legend, it certainly deserves a post all of its own.

This tiny Cotswold’s village is a filmmakers delight, not only for its charming English medieval feel, but also because it has no tv aerials of telegraph poles!

It thrived using its local resource of sheep and its cloth industry saw its distinctive red and white cloth being shipped all over the world. The focal point of the village still today is its market cross and butter market in the square, being granted the right to hold a weekly market by Henry VI.

It’s no wonder why Scotland has been voted the World’s Best Cinematic Destination in 2015. With locations that brought us Monty Python’s Castle of Aaaarrrghhhhhh, Mij the Otter in Ring of Bright Water, the opening scene of Trainspotting, THAT scene from Chariot’s of Fire and the ominous appointment with the Wicker Man, the list goes on and on. Even Groundkeeper Willy from the Simpsons is from Orkney!

Home to some of the epic scenes of the movies, it is also the place where a terrible tragedy took place. I write about the Massacre of Glencoe here: http://idigarchaeology.co.uk/a-true-game-of-thrones/

I was lucky enough to have a wonderful Harry Potter inspired holiday in Glencoe in 2016. We went ‘behind the scenes’ and visited locations such as the site of Hagrid’s Hut, the lake where Harry rode on Buckbeak and had a First Class steam train ride on The Jacobite (aka the Hogwarts’ Express) past Dumbledore’s island burial place and over the Glenfinnan Viaduct (although we substituted Butterbeer for a bottle of fizz..!) MAGICAL!

The Jacobite, over the Glenfinnan Viaduct

VERY excited to be on the Hogwarts Express

Not butterbeer, but just as special!

Used in the Pilot episode of Game of Thrones as Winterfell but never aired, this castle is more famously known from featuring in Monty Python and the Holy Grail.

It was the real safehouse of Bonnie Prince Charlie during the Jacobite Risings and was used as a prison for troops captured at the Battle of Falkirk. Some escaped by knotting together bedsheets and climbing from the window and these included famous Scottish author John Home and minister John Witherspoon. Witherspoon was later one of the Founding Fathers of the United States and the only active clergyman and college president to be a signatory of the Declaration of Independence in America.

The chapel had been a major highlight in tourists’ diaries when visiting Scotland for hundreds of years. Since the books and film Da Vinci code hit the public eyes, it has become ever more popular and is the setting for more than one legend.

Its Apprentice Pillar is where a Master Mason’s apprentice started work without him. In a fit of jealous rage, the Master hit the apprentice over the head with his mason’s mallet and killed him. The Mason’s head was carved into the corner overlooking the column carved by the apprentice so he would overlook the lad’s work forevermore as punishment for his crime.

Some of the carvings are said to depict maize which was not known in Europe at the time of carving and is said to be proof that the Earl had travelled to America well before Columbus.

My sister and I (wrapped up warm!) at Rosslyn Chapel

As per the novel, the original crypt of the Rosslyn Chapel is said to be the resting place of the Holy Grail, the mummified head of Jesus Christ the treasure of the Templars and/or the original Crown Jewels of Scotland. Extensive searches were undertaken when the 2nd Earl of Rosslyn’s dying wish was to be buried within this crypt but it was never found.

A tiny rugged island off the west coast of Ireland hit the big screen a year or two ago in the final scene of Star Wars: The Force Awakens and features in the new film Episode VIII. Luke Skywalker most probably chose to hide here for a similar reason to the island’s only ever inhabitants, Monks- solitude. The Monastery, inhabited between the sixth and the twelfth century, comprised of six beehives cells, stone crosses, tiny chapel areas, a medieval church and a hermitage are joined by carefully planned water courses designed for collecting and purifying water. It is now a UNESCO World Heritage Site.

As well as Iceland, Malta and a lot of overseas locations, Ireland has been predominantly used for filming Game of Thrones, including Winterfell at Castle Ward in northern Ireland. Now a National Trust property, it comprises of a large coastal estate, mansion and tower house with a vast history and mixture of architectural styles.

But sadly it is also the scene of a true conflict between warring houses when in 1973 two catholic members of the Provisional Irish Republican Army were killed in a premature bomb explosion within the grounds.